Percy Bysshe Shelley in the January 11, 1818 edition of The Exmainer, under the penname of Glirastes (a "portmanteau of Shelley's own design, combining the Greek suffix erastes, meaning 'lover of,' and the Latin Gliridae, the scientific term for the family of the dormouse. Signing 'Ozymandias' with the name Glirastes, lover of dormice, was an inside joke and a show of Shelley's affection for Mary.").

Audio version as read by Richard Attenborough in Trespasser.

An indiction or so late in posting this addition to the graphics page... #

🌱 Picture Resizer 6.0.1.1 [395k] + Drag and drop to batch resize images. Rename executable to change parameters like size, sharpness, and recursion, or run via command line for more options. (Variously referenced as "PhotoResize", "PhotoResizer", and "Photo Resizer" in the documentation and version info.) 📺

When connecting an external monitor to a MacBook, the screen is extended rather than mirrored by default, making it difficult to work around broken internal monitors. One of these keyboard shortcuts should switch your Mac to mirrored mode:

Pressing the shortcut again will toggle back to extended mode.

UPDATE: According to Patrick Wardle, "As of macOS 11.2 beta 2, the (in)famous ContentFilterExclusionList is gone!"

In addition to the hacky workaround previously outlined in these pages and Objective Development's steps for enabling Little Snitch 4.6 under Big Sur, there is now a third option for preventing Apple from bypassing application firewalls, courtesy of Hany (author of Murus and Vallum): Exclusions Blaster. Simply copy to /Applications, run, and approve the system extension when prompted - that's it! 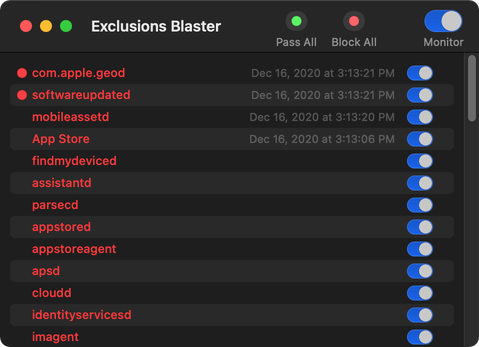 Successfully tested under both Intel and M1 Macs, though the README warns that it is "experimental".

* Grammatical and spelling errors have been left intact.

Victor Mair has excluded this passage from his Wandering on the Way: Early Taoist Tales and Parables of Chuang Tzu (see ellipsis on page 155 of the April 2000 University of Hawaii Press edition). A possible explanation from Paul Rouzer's A New Practical Primer of Literary Chinese:

"This passage to the end of the chapter may seem a non sequitur. What does a discussion of the behavior of the 'Great Man' have to do with metaphysical categories of size analyzed earlier? Consequently, some have assumed that the rest of this lesson's text has been interpolated and have removed it. However, if the author is attempting to show how our mental categories are conventional and arbitrary, then he can also claim that our behavior in the world should not be based on absolute and unchanging standards as well."

Whose computer is it? #

Patrick Wardle highlighted a tweet by Maxwell ("Some Apple apps bypass some network extensions and VPN Apps. Maps for example can directly access the internet bypassing any NEFilterDataProvider or NEAppProxyProviders you have running"), sparking an extensive HN discussion on Apple's ham-fisted tactics (not unlike Google's recent behavior).

Deleting those entries under Big Sur turned out to be rather involved; in fact, one could be forgiven for coming away with the vague suspicion that Apple would prefer them not to be disturbed:

Little Snitch 5 and TripMode 3 had no problem blocking the previously-cloaked processes afterwards: 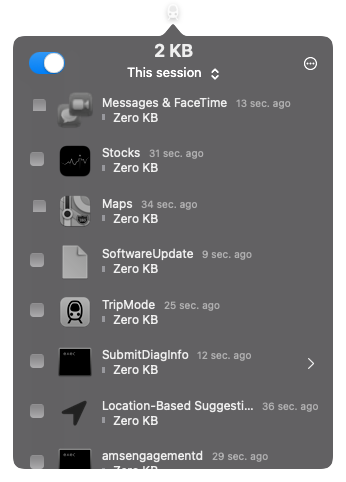 though one may well be left with a niggling doubt: should all this really be necessary to monitor your own computer's network traffic?

UPDATE 1: Hany, author of Murus and Vallum, was kind enough to reply with some testing of his own:

I did some tests and I’ve found at least one major issue on Catalina.
Removing all entries from the dictionary key seems to work for most listed processes: connections are seen by the network filter and flows are passed/blocked according to matched rules. But it does not work for at least one of the listed processes: IMTransferAgent. If you use macOS Messages.app then you may be aware that this process is used to send messages attachments.
If removed from the list, the process is always blocked. The filter provider does not see any flow for that process, and any attempt to send attachments with Messages.app will fail until you disable the filter.

UPDATE 2: The traffic of some Apple processes isn’t shown in Little Snitch 5.

UPDATE 4: Tweet by Apple developer Russ Bishop: "Some system processes bypassing NetworkExtensions in macOS is a bug, in case you were wondering." and some replies:

Before iOS 9, iOS apps could be backed up to Macs and PCs via iTunes1:

Adding insult to injury, iTunes 12.7 removed the App Store, closing the door on downloading/backing up iOS apps from there:

You may want to back up an app before it disappears from the App Store or preserve an older, better version, e.g.,

Download iOS apps from Apple to a PC or Mac

iOS apps can still be downloaded via iTunes 12.6.3 (does not run on Mojave or higher), Apple Configurator 2 (with some caveats), or iMazing:

Copy apps from an iOS device to a PC or Mac

To back up all apps on your iOS device to apps/ in the current directory of your Mac, jailbreak your device, install usbmuxd, start iproxy, then:

Install .ipa from a PC or Mac to an iOS device

iOS Safari has a weight problem #

Others advise waiting days for the issue to clear; sadly, not even weeks availed.

Still others recommend a draconian backup, wipe, and restore approach.

"At a minimum, I’d like to know what’s taking up all that space. Those 7GB of Documents & Data probably include something that’s gotten stuck, that can’t be deleted, such as an old iOS update perhaps. But it would be helpful if every app had to offer a feature to delete its caches, or if there were a global Clear Caches feature in iOS."

Found the offending files by jailbreaking and SSHing into the device then:

Emptying the tmp directory did the trick:

H/T jareehD for the filepath hint.

Delete the divers subdirs which appear between "/blog/" and the filenames in this example: